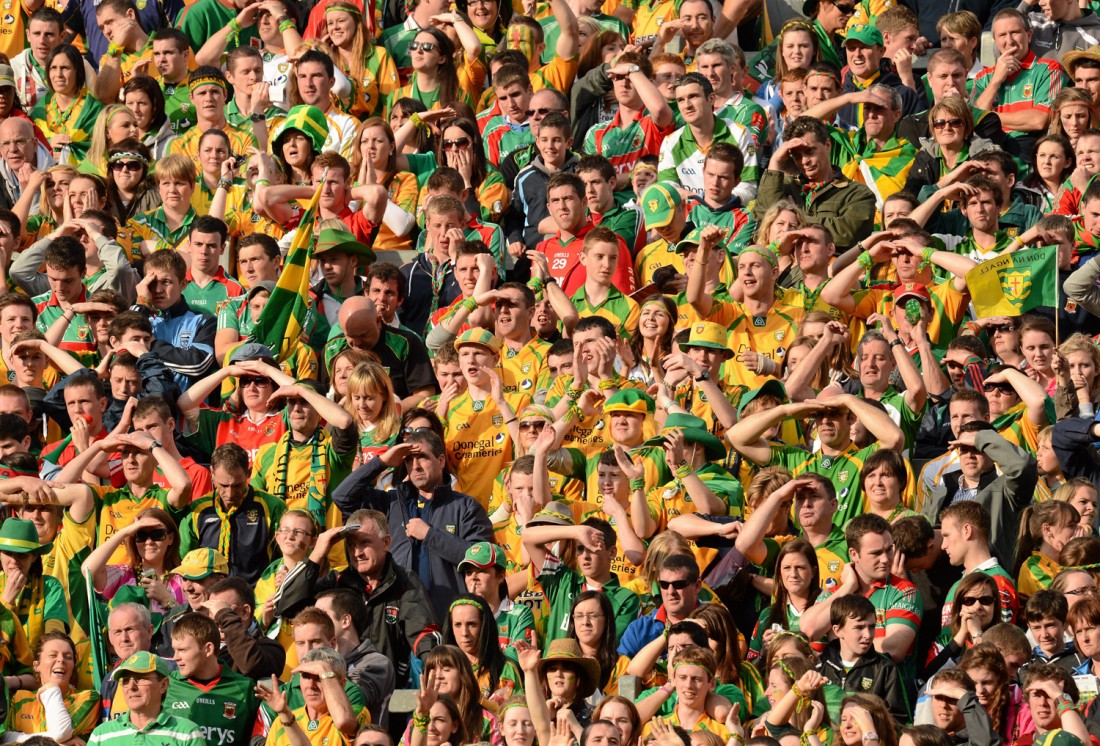 Donegal supporters at the All-Ireland final against Mayo.

DONEGAL clubs have been offered a refund after the GAA’s Management Committee found a prohibited ‘levy’ to have been placed on the county’s allocation of All-Ireland final tickets.

The Management Committee launched a probe into claims that a €5 levy had been added to the €80 All-Ireland final tickets for the September 23rd game against Mayo in Croke Park.

Since the claims first arose, leading Donegal GAA officials have always insisted that the additional €5 was ‘optional’ and that for the additional €5 the purchaser would be entered into a fund-raising draw to go towards the Donegal team training fund.

The Donegal executive submitted a response to a query from the Management Committee on the matter. However, the response was rejected by Croke Park’s top brass – who summonsed the Co Chairman, PJ McGowan, and the Co Secretary Aodh Mairtín Ó Fearraigh, to headquarters to answer the charges.

Last week, the duo attended a hearing on the controversial matter.

“The officers apologised for the inaccurate letter originally submitted and explained the circumstances surrounding the distribution of All-Ireland tickets,” stated the minutes of a Management Committee meeting.

The Donegal delegation also said there would be no repeat of the incident, which meant leading officers in the county avoided disciplinary action, which could have forced their resignations. A formal investigation was avoided when the Donegal pair admitted the charge.

This morning, the Co Secretary sent a circular around the clubs of the county detailing the next course of action.

“Coiste Bainistiochta Chumann Luthchleas Gael in Pairc an Chrocaigh has decided that all clubs in Dun na nGall that incurred a charge in relation to an All Ireland ticket draw, are to be offered a refund,” it read.

“Please contact An Cisteoir to discuss same no later than 31st December 2012.”

The total amount raised from the additional €5 on tickets is understood to be in the region of €54,000 and not quite as high as the €60,000 that has been reported elsewhere.

They successfully argued that this was in addition to clubs’ allocations and that it was not compulsory. Mayo’s contention that the extra tickets offered were from an allocation that was previously dolled out to sponsors was accepted by the Management Committee.