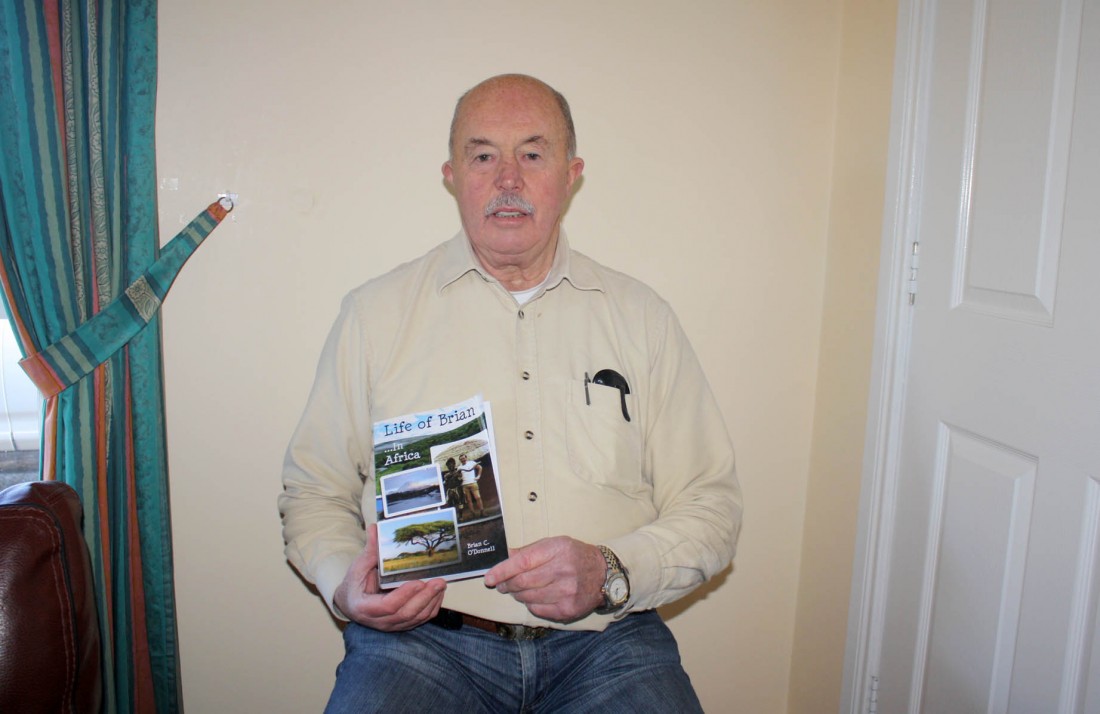 Brian C. O’Donnell with a copy of his book, Life Of Brian…In Africa.

BY SEÁN P. FEENY
FOR YEARS Brian C. O’Donnell told people stories of his life in Africa, so brilliant people wanted to hear them again and so fantastic, they were hard to believe.

We caught up with 72-year-old pensioner to give a little taste of probably one of the most exciting life stories you will ever hear.

Brian is a self-confessed ‘rolling stone’, but six years ago he returned to his native Donegal to retire from a what was a very exciting, but also hectic life.

He had returned from Belgium, where he had opened the first Irish pub in Brussels and worked seven days a week, sometimes 20 hours a day, for over two decades.

When he returned to live in Belcruit, Brian admitted he did nothing for almost a year, enjoying the relaxation and having the odd lie-in and doing whatever he wanted.

Four years ago he decided to put his life down on paper and the end result is a truly incredible life story that is now available as paperback and online at Amazon.

Brian’s story begins in 1974 when he was a young Donegalman living in Manchester, admittedly ‘fed up’ with his job, the weather and the life he was leading. “I was burnt out and needed a change and wanted to live somewhere in the sun,” he said.

His choice may have been one of the last for most people, especially during this era of the country’s history, but Brian chose South Africa.

Brian flew to Johannesburg and the travelled to Capetown where his car had been shipped to and he spent the next four months driving through the African continent all the way to Kenya.

“Coming from Europe everything was completely new to me and as I had just jumped in the car and hit the road, I had to learn a lot of things along the way,” said Brian.

The Kincasslagh man enjoyed his experience so much that he decided to travel back to Manchester to settle a few matters and head straight back to Africa.

By 1975 Brian was living in Zambia where he was working as an ivory and currency smuggler, shipping out local currency for ex-pats working in the copper mines.

He said: “They were all being paid in local currency which they weren’t spending, so I would help them get it into European bank accounts and get commission.”

Brian said he had a ‘few close calls’ doing this work so he concentrated on ivory smuggling. “There was lots of it and some was being purchased legally and some through brown envelopes and the best would mostly come from the Luangwa Valley near the Malawi border which we would then sell in Antwerp, Belgium,” said Brian.

Again Brian said he felt ‘a breath on my neck’ and decided it was time to move and into another very unusual business that involved crocodiles.

“I moved to Congo where I continued to trade in ivory but also started trading crocodile skin, shooting and skinning the crocodiles myself,” he said.

It was still ‘75 and Brian was hired to assist the German company OTRAG (Orbital Transport and Rockets, Inc.) setting up testing and launch facilities in Shaba, Zaire (now Katanga Province in the Democratic Republic of the Congo).

In 1977 and 1978 Brian got caught up in two wars losing everything but the clothes he was wearing, twice at the hands of the Katanganese rebels based in Angola.

But this experience had not put Brian off life in Africa just yet. After being brought to safety in Kinshasa, Brian left for South Africa where he again traded in crocodile skin.

He moved to Zambia in the late 1970s and again ended up in the middle of a war and following an injury caused by a bomb planted by the Rhodesian Army he spent for months in hospital in Johannesburg.

Brian decided it was time to leave and after living and working in Texas for four-and-half-years, he moved to Belgium to open the first ever Irish pub in Brussels.

The book costs €12 and €2 from the sales on the night will go towards St Vincent de Paul. The book is also already available on Amazon and for Kindle.