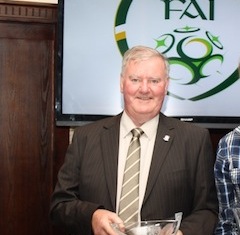 AS the Ulster Senior League’s clubs prepare to meet tonight with the ever-divisive topic of summer/winter football on the menu one of the League’s leading officials has urged clubs to ‘think long and hard’ about a subject he feels could make or break the future of intermediate soccer in Donegal.

Dessie Kelly, the USL’s Assistant Secretary has admitted that the future of the League is something about which he holds concerns.

The long-serving local official and Letterkenny Rovers clubman says that the summer/winter debate is secondary when it comes to the actual continuation of a League that has been in existence since the mid 1980s.

Representatives from the League’s nine clubs meet in the Mount Errigal Hotel, Letterkenny tonight, when they will deliberate upon the seasonal issue once again.

Since 2007, the Ulster Senior League has been operating off a March-October calendar. At that year’s Annual General Meeting, it took the casting vote of the then-Chairman Eamon McConigley to change the landscape such were the tight margins of the voting.

The matter has been an annual subject at subsequent AGMs. Fanad United, in particular, have been strong opponents of the summer season since day one and, at that meeting in 2007, vowed to table a motion for change every year.

Following a turbulent 2012 for the League, there is now a growing feeling that a return to an August-May season could be a shot in the arm.

“People should think long and hard about this,” Mr Kelly cautioned.

“The retention of our League is the biggest thing that I am concerned about.

“I am an advocate of summer football, but I wouldn’t be against winter football. I go out to games every weekend anyway, so it doesn’t bother me when we play.

“We can’t lose teams from the League over a stupid decision – the League and its future is more important than the issue of summer football.”

No decision will be taken at tonight’s meeting, though the exploratory talks should give some indication as to the way clubs will vote when the League’s AGM takes place in December.

Of late there have been rumours that some clubs have discussed leaving the USL to return to the Donegal or Inishowen Leagues but, as yet, none have confirmed their intentions. Ahead of the 2012 season, Killea FC withdrew their participation, while the League Chairman Eamon McConigley tabled his resignation during a season that saw several high-profile administrative spats ignite.

Many of the League’s clubs have expressed frustration at the crossover of seasons with the Junior Leagues, which can lead to a drain in players as one season nears an end and another beginning. Prior to the start of the Donegal League in August, a deluge of players left the USL to take up residency with another club. With the FAI rules meaning that a domestic rule cannot be enforced, the League’s hands are tied in this instance.

While most clubs have not publically commented on the matter, Swilly Rovers have voiced their strong support to the retention of summer football.

A letter to the Donegal New by the club’s PRO John Diver has contested that the summer football has led to gate receipts having ‘increased significantly’.

“While respecting the views of others who favour winter football, the Airtricity League has shown a vision resulting in a vast improvement in our game,” Mr Diver wrote.

“By the U.S.L adopting to summer football, they have shown that change can take place and this should be continued for the benefits of pitches, players and spectators.

“Every club does not have facilities to accomodate winter football and as proven in the past, some clubs lost finance and venues because of having to reverse their games.

“Summer football can be played over a shorter period where as winter football is long drawn out and takes in ten months of the year approximately.

“In recent seasons games have taken place prior to weekends, giving football people more time to spend with their families. Players and spectators nowadays appreciate the family time afforded to them by involvement in the summer football schedule.”