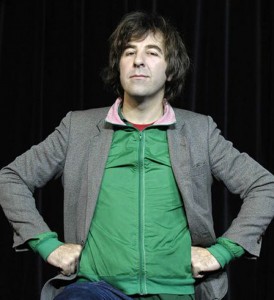 With recent TV apperances that include hosting BBC’s Nevermind The Buzzcocks and appearing as a panellist on QI not to mention his best-selling book 100 Facts about Pandas and recently published 100 Facts about Sharks, David O’Doherty is proving to be one of Ireland’s hottest (in a mild mannered way) comedy exports.

Having scaled the heights of telemarketing and temping, David O’Doherty first stepped on stage at Dublin’s Comedy Cellar in 1998. In 1999 he won the Channel 4’s ‘So You Think You’re Funny’ award for new comedians and was runner up in the BBC New Comedy Awards.

His first full show ‘The Story of the Boy Who Saved Comedy’ was performed at The Edinburgh Festival Fringe in 2000 and received a nomination for Best Newcomer.

He has returned to the festival six more times, his 2006 show ‘David O’Doherty is my name’ receiving a nomination for best show and his 2008 show ‘Let’s Comedy’ won the if.comedy Award (former Perrier) for Best Show. He has performed around the world at festivals in Melbourne, Montreal, New York and Wellington.

He has toured around Ireland with Tommy Tiernan, around Britain with Rich Hall and recently around America with Demetri Martin. In 2006 he recorded his first CD “Giggle Me Timbers (or ‘Jokes Ahoy!’)” at home in his flat in front of 35 people.

His first television series ‘The Modest Adventures of David O’Doherty’ was transmitted on RTE in Ireland in 2007. He has written widely for newspapers and magazines, published a book for children, written a play (‘Saddled’, with Bryan Quinn – the world’s first theatrical production to feature live repair of audience members’ bicycles), and a radio series about bee detectives with his brother Mark (‘The Bees of Manulla’ RTE).

See David O’Doherty on on Sat 1 Dec at An Grianán Theatre, Letterkenny. Gig starts at 8pm and tickets are available at An Grianán now on 0749120777 or see www.angrianan.com