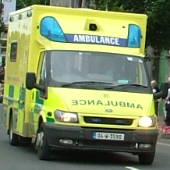 SINN Féin TD Pearse Doherty has expressed ‘shock and outrage’ after a mother was forced to drive her unconscious child to Letterkenny General Hospital (LGH) in her own car with a paramedic in the back.
The paramedic took the decision to abandon the ambulance on Tuesday as he was the only paramedic on duty at the time.
Deputy Doherty said the paramedic told the mother to drive her car to LGH while he treated her child in the back seat.
“I was outraged to hear that such an incident occurred last Tuesday. It is reported that an emergency call was made for an ambulance to attend to a young child, who was unconscious,” he explained.
“An ambulance was dispatched with one advanced paramedic, who was driving the vehicle.

At the scene, the paramedic made the clinical decision, based on the needs of the child, to travel back to the hospital in the back of a car driven by the mother of the young child”.
When Deputy Doherty sought clarification from the HSE on the matter, they confirmed that the advanced paramedic was indeed working on his own from 5pm to 8pm on the evening in question.
“It was explained to me that this was due to staff reporting sick and requesting force majeure leave at short notice.

I would ask why alternative arrangements were not made to ensure that there were at least two paramedics available to respond to any emergencies.
“It is completely unacceptable that a mother be required to drive her child to hospital in such circumstances, in a vehicle which is not adapted to the needs of the situation, simply because there is inadequate staff to drive the ambulance.”
The Donegal South West TD said he understood that the paramedic in question requested that two paramedics who lived nearby be contacted to assist at the scene but this was refused.
“This is the effects of budget cuts and austerity on our public services.

Sinn Féin has been raising this very issue with the HSE for some time now and we clearly see the impact in this case.
“The circumstances of this case could have been tragic and as a parent of four young children myself, the potential outcome doesn’t bear thinking about.

I call on the HSE to immediately clarify how such an incident was allowed to happen, the reasons why the request to contact local paramedics was refused and to put stringent guidelines in place to ensure such an incident never occurs again.”