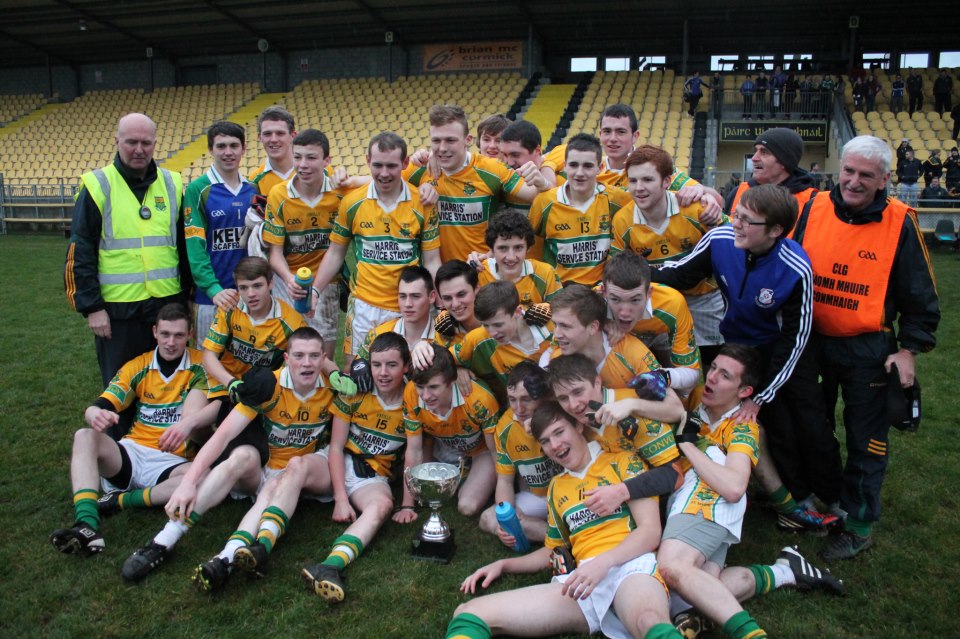 By Chris McNulty at O’Donnell Park

A LANDMARK year for the St Mary’s club in Convoy got even better yesterday as a five-goal salvo saw their minors clinch the Donegal Minor Division 2 Championship crown after a thrilling battle with Naomh Columba in Letterkenny.

Two late goals from big Raymond McNamee secured the prize for the east Donegal side. The Donegal minor was moonlighting on the edge of the square and his goals in the 54th and 60th minutes took the Convoy boys a step too far ahead for Naomh Columba to claw back.

The Glen men were level with 15 minutes remaining thanks to a free by Pauric Cunningham – but that would be their final score as Convoy seized the day.

Having got his hands to an earlier delivery from Ryan Bonner that he batted wide, McNamee was now the target for the darts thrown by the Convoy players. After winning a free for Peter Blake to stretch the lead, McNamee was at it again when he took receipt of another high ball into the danger zone before rolling home a low effort, his team’s fifth major of an exciting final.

The gloss was polished by a stoppage time point from Gavin Sweeney sparked scenes of wild jubilation from the Convoy players and their ecstatic supporters in the stand.

It was no more than they deserved after a magnificent conclusion to a day that was their’s and a day that saw their 15-year old wing-forward Jack Blake light the touchpaper. The zippy and busy Blake was exceptional all afternoon for his team and provided a constant threat to Glen.

The movement of McNamee had a huge impact late in the day when Convoy seized their moment, but Blake was the brightest spark on a day that will glow for some time in the club’s history.
“It means a lot to the Convoy club,” beamed their manager, Prunty, following another historic day for a club that continues to grow, on and off the field.

“This hasn’t happened overnight. We have had a lot of lean times and it has taken a lot of work to get to this stage.”