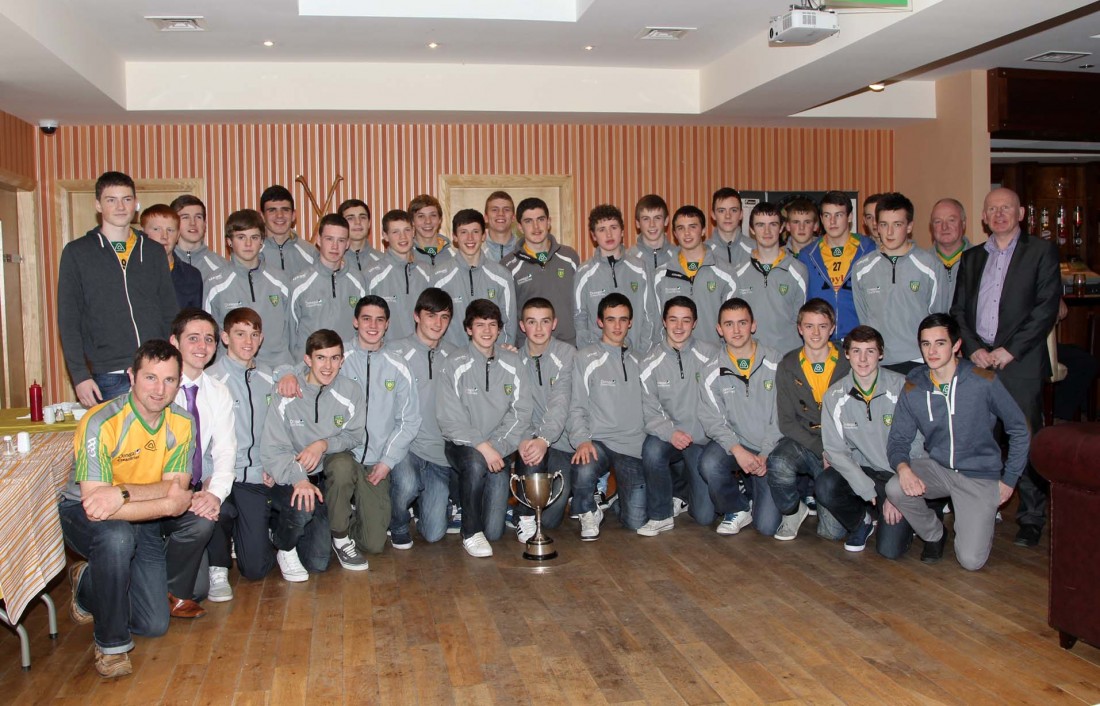 DECLAN Bonner has urged his 2012 Buncrana Cup winners to give themselves every chance of making the breakthrough to Donegal minor, under 21 and, ultimately, senior squads in the coming years.

Under Bonner, the Donegal under 16s won the Buncrana Cup in August. Bonner, a former Donegal senior manager, will now step up to manage the Donegal under 17s for 2013 and, ahead of his first get together tomorrow (Saturday) in Glenswilly, he has urged his players to put in the hours.

Bonner was speaking at a presentation night in Sean MacCumhaill Park on Wednesday night where his Buncrana Cup winners were presented with their medals.

“Ten of these lads are in the county minor squad in 2013, but I want to endeavour to work all of the other players and try to get them ready to step up to the minors for 2014,” he said.

“It’s all about how you go about your time and there’ll be a lot of work needed in the gym and on the training ground.”

Donegal won the Buncrana Cup when they edged Tyrone 2-9 to 2-8, with the goals of Captain Stephen McBrearty and Gavin McBride crucial scores at The Scarvey. It was the perfect end to their perfect season.
Bonner said: “We went through the whole season without a defeat and we had a couple of very exciting matches along the way.

“The final against Tyrone was as good an underage game of football that I’ve seen for a long time. The game looked like it was gone from us, but the work we had done all summer and the attitude saw us come out on top.

“We wanted to get the best players available to us – and I think we did.

“The lads who came in were an absolute credit. Anything we asked of them they did it. They trained hard and anytime they were injured they still came to training.”

Bonner paid tribute to the parents, the clubs and the county board, while he reserved a special mention for his backroom team Sean Noonan, Robert Farren, Shay Murrin, Gary Boyle and Oisin Cannon.

The manager also thanked Packie McDyre for his assistance behind the scenes, as well as physios Mickey McGlynn and Emma McAteer.

Bonner also paid tribute to loyal Donegal follower Edmund Brennan, who was in attendance on Wednesday night, for his unstinting support to the county underage teams.

Mick McGrath, the county’s Children’s Officer, added his message of congratulations. The Ballyshannon man said: “I congratulate all of the lads for their attitude, for their commitment and for the pride they showed in the jersey.

“Any day you beat Tyrone is a proud day for Donegal. They have set the mantle and set the bar. That day in Buncrana, we took their bar down. Well done to everyone involved in doing so.”

He also paid tribute to the long time sponsor, Martin Coyle, from Coyle’s Coaches, and to the Games Development Manager Mick Murphy and the Coaching Officer Anthony Harkin.