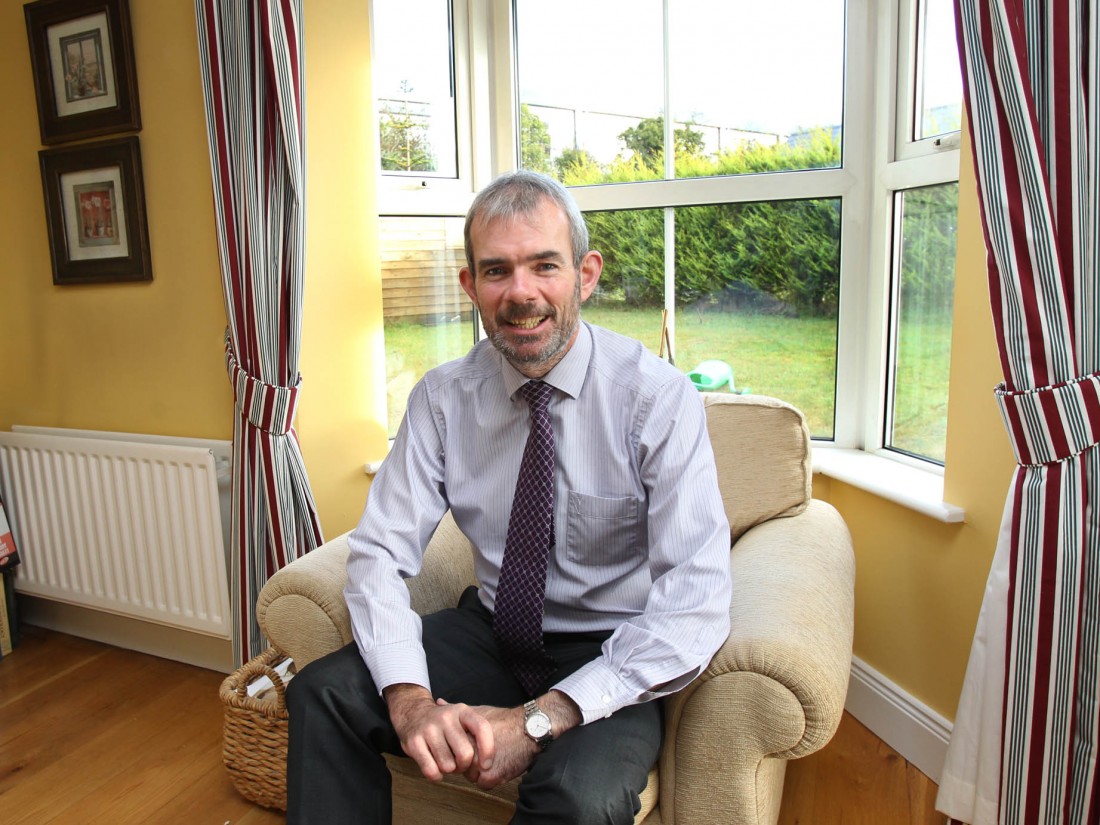 Garvan McCloskey, who is making a new start in business in USA.

BY HARRY WALSH
THE announcement that AIB is to close eight of its 16 branches in Donegal has provided a ‘window of opportunity’ for one Letterkenny man to return to work in New York – for a third time.

Garvan McCloskey, a Senior Financial Planning Consultant with the State controlled bank, travels to the Big Apple early in the new year with his wife, Leonie and they are planning to make the switch Stateside later in 2013.

Garvan (49) first travelled to New York with fellow Letterkenny man Johnny Kelly, from the Oldtown, in the early 1980s. It was a time when rural Ireland was emptying out and, needless to say, two young single men in their early twenties had ‘great craic’.

In 1990 Garvan met his future wife Leonie, a Galway woman, and the couple returned home in 1991 before moving back to America twelve months later.

The couple have two sons Conor and Jack and when the boys were 7 and 4 the lure of Ireland came calling once more. That was 1998.

Fast forward fourteen years and Garvan’s on his way back to America to run a bar and restaurant by the name of Shea O’Briens in New Paltz, a small town of 6,000 people in upstate New York.

“It was always in the back of our minds to go back to the States one day – especially Leonie – but I always paid lip service to that. I was very happy here and had got involved with the local St Vincent De Paul Society. It’s what my family had done before me and I was in a good place,” he recalled this week.

Garvan’s father Liam is a founding member of the local SVP Society in Drumoghill while his mother Mary has also devoted much of her spare time to helping those in need.

“I would encourage anyone to get involved as you get so much more out of it than you could ever put in. You might think you’re getting it hard until you go and visit some of the clients that St Vincent De Paul assist. There’s a lot of poverty on our own doorstep and, at this time of year, I would urge people to do what they can,” he said.

Garvan has also enjoyed his time working with AIB and he paid tribute to Declan Lawlor, the man who introduced him to a career in banking.
“Everyone is giving out about AIB and bankers but I have to thank them. I’ve managed to build up a very successful career with them.

“It was nice to have built up such a career – not bad for a barman. It just shows that if you put your mind to it anything is possible,” he said.

Garvan started his working life with Donegal County Council before emigrating to America, aged 22, where he worked in the bar and catering industry.

With the recent news that AIB had decided to close half of its branches in Donegal, Garvan used the opportunity to re-invent himself once more.

“I’m always a person who sees the glass as being half-full. I discussed it with Leonie and she was delighted. She didn’t really think that I would go back,” he said.

“I spoke to a couple of people in the States and one of them came back with a proposition, to become a partner in a bar and restaurant – which is something I used to do.

“I got word of that opening shortly after I had been accepted for redundancy – something which I took with mixed feelings but, life is short. I’m a cancer survivor and the over-riding emotion is of excitement,” he said.

“My family is more or less reared. It would have been better timing had this come in a year or two but you have to grasp an opportunity when one comes your way. We’ll manage whatever arises over the coming weeks and months as we’re a very strong family. It’s very difficult to leave Letterkenny because I love being here and feel a real part of the local community,” he added.

While Garvan and his wife have taken the decision they’re not abandoning Letterkenny.

“Certainly not. We’re keeping our house in Letterkenny and we’ll be back home several times a year. I would love to figure out a way of staying here part-time and, usually, if I put my head to something, I manage to come up with a solution. Here’s hoping,” he laughed.

Garvan chose to adopt a stubborn approach when he was diagnosed with cancer shortly after running the New York marathon in 2006.
“I was a 43-year-old when I was told that I had Hodgkin’s Lymphoma. It was at that time that I first felt really, really lucky to be involved in a community like Letterkenny and the bigger community that is Donegal. I received fantastic care from the nurses and doctors in Letterkenny. I was getting text messages and offers of Masses from all over the country and felt, wow, this really is a special place,” he said.

“Here we were in the middle of the Celtic Tiger – a time when people were too busy to speak to one another – and yet I got an awful lot of help. That inspired me to get more involved in the local community. I was also very lucky that Leonie was able to be with me at home for the year after I got the cancer and throughout my recovery.

“She was brilliant. That inspired Leonie to go back to college and she graduated with a first class honours degree in nursing last year – which made me very proud – and got a full-time job in Altnagelvin Hospital,” he added.

Garvan is back running and recently completed the Dublin marathon in a time of 3 hours 21 minutes which guarantees him entry to the 2014 Boston Marathon.

Garvan was also a leading light in ‘Relay for Life’, a 24-hour event organised to raise money for Cancer Research in Letterkenny in May.

“That turned out to be one of the greatest things to ever happen in my life. We set out to raise €100,000 and collected €350,000 but what was much bigger than that was to see 488 survivors, ranging in age from 5 to 93, taking part on the day. Cancer hits everybody – it’s an equal opportunity disease.

“The lighting of 5,600 candles at dawn in memory of those who haven’t been as lucky was also memorable.

“Unfortunately, a local newspaper chose to question the whole event – asking where all the money had gone. Maybe it was a slow news week or maybe there’s still the odd begrudger out there. I was disappointed by the stance they took but it’s in the past now and hopefully I’ll be here for next year’s Relay for Life.”

While we’re all living in austere times, Garvan explained that his decision to relocate to America was a lifestyle choice.

“I’ve got a nice job with AIB. My wife has a permanent job in Altnagelvin Hospital and we both enjoy what we’re doing but we both felt a strong pull to go back to the States.

“Between the weather and the current austerity, that decision has been made that little bit easier. It’s difficult to be leaving my mum and dad behind but on the other side of things we’re looking forward to whatever new opportunities come our way,” he said.

He believes that there’s plenty of opportunities here in Donegal too.
“Young people can actually afford to buy a new house now in Donegal if you have a job. When I was young you couldn’t do that. Okay, jobs are harder to come by but that will change as well. It’s a cyclical thing. Look on the bright side. You can always use the down time to train yourself up,” he said.

They say that life begins at forty. For Garvan that particular milestone co-incided with a new career in running.

“You can blame Rory Kennedy for that. I was content enough to be walking around the town when he cajoled me into taking up the jogging. It’s my drug of choice at the moment, I’ve tried a few others in my time but I’m more than happy to settle on this one,” he laughed.

“I’ve faced my own mortality which helps to put things into perspective and, hopefully, I’ll live through three or four more bad times yet in my lifetime,” he said.

Speaking about his family, Garvan explained: “Jack is a third year Chemical Engineering student in UCD while Conor will sit his leaving certificate next summer.

“It’s not perfect timing but is there such a thing? I’m not retiring I’m just going from working hard to working harder but I like that, I’m comfortable with the hospitality sector. We’re going away on our own terms. It’s a lifestyle choice. We’re part of the so-called squeezed middle classes and it’s certainly not getting any easier but it’s something we always said that we would do.”

“This is a different recession to the one we all experienced back in the eighties. Now, everyone is up to their necks in debt while back then we just didn’t have any money. It’s difficult to watch a lot of very good people going through hard times,” he said.

Whatever happened to his old friend Johnny Kelly? “Johnny’s back in Manhattan. He came home the same year as me. He married a girl from west Cork and moved down there but he lost his job and has moved back to New York. There’s a few of the old guard starting to make their way back over there,” he admitted.

“That said, don’t be surprised if you see me back here in some guise in the not too distant future,” he smiled.