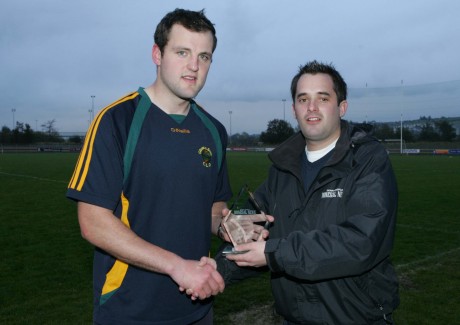 Former Armagh manager Joe Kernan wrote a couple of weeks ago about ‘hunger’.

It is regularly said of teams who win a Championship for the first time that ‘they won’t have the same hunger next year’.

Often, though, it isn’t because of a lack of hunger or desire that teams don’t retain Championships – rather, they’ll have been beaten by the better team on a given day.

Kernan’s Armagh broke through in 2002 to win their first, and only All-Ireland. They were back in the final a year later – but in the first all-Ulster All-Ireland it was Tyrone who won the day.

It wasn’t that Armagh’s hunger had waned, but Tyrone had a real bit between their teeth and were the better side in the final.

Kerry’s footballers and Kilkenny’s hurlers are seen as the models of consistency who can argue with the old lines about hunger lessening with the taste of success. Last Sunday, Crossmaglen looked as ravenous as ever as the beat Pearse Óg to win their 16th Armagh SFC title in 17 years.

Hunger? How about asking Donegal captain Michael Murphy about his appetite?

“That desire is very hard to bottle, but to be successful it’s something you have to do. We’re very hungry to keep doing what we’re doing. It won’t get any easier, but by God we’ll not give up.”

The words aren’t cliched, but a powerful reminder of the intentions of this Donegal team to dine at Gaelic Football’s top table when they return in 2013.

“The teams like Kerry, Tyrone, Kilkenny and then, from the club scene, Crossmaglen, are the teams whose hunger we have to emulate. Every day they go to play, they bring their ‘A’ game.

“The week after the final, everyone was talking about the win, but before you know it the mind was turning straight to next year. That is where the mind needs to be because you can’t lose the run of yourself. The day in Gaelic football that you take your eye off the boil is the very day that you will come unstuck. It is about 2013 now.”

In his weekly column in The Belfast Telegraph, Kernan said that ‘hunger’ was the one element that could unite players. “All the training manuals in the world and a wealth of coaching badges can be rendered useless unless hunger is the overriding attribute within any team,” he said.

A mystique surrounded Donegal’s tale in 2012, the stories about their training reached an almost laughable climax when Joe Brolly insisted that Donegal were training 12 times a week and Pat Spillane mentioned Rory Kavanagh’s eight dinners a day!

That said, Donegal’s players have been living gruelling lives – but the capturing of Sam Maguire has made it all worthwhile. The snowy nights in Castlefin, the frosty 6.30am meetings at the Letterkenny Community Centre have now helped deliver this island’s greatest sporting prize.

“You know, it’s not hard,” says Murphy, now in his fourth and final year of PE and Biology studies at DCU.

“There’s no doubt that there have been increased demands on players and with the level every team is trying to get to, all players are trying to get an edge.

“Working with the group of players we’ve had this last couple of years – and, hopefully, will continue to have in the next few years – has been a pleasure.

“We’re best friends away from the football. We’ll go golfing, we’ll do different things, travel together, go to the gym together, whatever.

“It’s very helpful when it’s that way and, anyway, when you’re winning, you don’t mind putting in the hours.

“It will get tougher, make no mistake about it – but we’re always striving to get better.”

Martin McHugh said in the week leading up to the final that Donegal could send no better ambassador up Hogan’s steps to accept Sam Maguire – and in everything from the final, Murphy showed his poise as a true captain and leader for Donegal.

For the totemic Glenswilly man, carrying out his duty on September 23rd was destiny – but it was also a dream.

“It is completely surreal,” he says.

“I didn’t think about it at all until last week.

“When you’re a kid, out kicking ball with the neighbours or down at the local club you’re always pretending to be the county player and you always wish that, someday, you’ll get to lift Sam Maguire.

“That has always been a dream of mine. To finally realise that was so special – and it’s an experience that I’m mad hungry to get a chance to relive again.”

After a year that was ravaged by injury, Murphy’s season seemed to be building to the final – and deliverance came in some style in the All-Ireland final. Just three minutes in, he rose above Kevin Keane to fetch a pass from Karl Lacey.

“It was a long time coming,” smiled the Donegal captain this week.

“We did work on certain situations in the build-up and we wanted to capitalise if those situations arose.

“Karl Lacey has been delivering top quality balls to inside forwards for years. He always has had that ability. The ball he gave in was perfect, it would have been hard to screw it up – I just caught it and let fly.

The All-Ireland final he notes ‘wasn’t one of our better performances…it wasn’t even a good performance’ as Mayo came back after Donegal shot ahead 2-1 to 0-0 by the eleventh minute – and the final whistle brought sheer relief and euphoria all at once for Murphy, who was locked in an embrace with Mark McHugh and Ryan Bradley when the cameras panned his way.

“For the final ten minutes, I was just waiting to hear the final whistle,” says Murphy.

“I was dying to hear it and when it went, it was something I’ll never forget.

“When we got the four points ahead, we were always guarding against complacency – especially after the late goals we conceded in the previous two games.

“Coming up to the 70-minute mark I took a wee glance up. Until that, I was just playing the game, but anytime Mayo were on the attack in the last couple of minutes I was looking up, wishing it was over.”

Murphy led his triumphant troops to all arts and parts of Donegal in a madcap homecoming week that had Donegal swept in a tidal wave of celebration.

“In general, the quantity of the crowds was just crazy,” says Murphy, whose voice was hoarse by the time he finally made his way to the final stop – fittingly, back at ‘the wee club’ in Glenswilly.

“Travelling along on the bus you’d hear rumours that there’s a big crowd here and a massive crowd there.

“It was so hard to keep times and we landed in some places at 1am, others closer to 2am. Seeing the smiles there and the smiles that Sam Maguire put on peoples’ faces will be forever etched in the hear.

“Each player will tell you that bringing Sam Maguire into their own club area was special. It really was something special for myself, big Neil (Gallagher) and ‘Copper’ (Gary McFadden) to do, bring the Cup into the pitch in Glenswilly where we’d grown up playing football.”

The young boy from Bomany who used to badger his heroes for autographs after every game he went to is now the man who’ll be pictured the county wide raising Sam Maguire.
The dream has become a reality for Michael Murphy.
In August, Anthony Molloy said it was time for him ‘to hand the baton on to young Murphy’. “No better man to take the Cup across the bridge into the Hills for the second time.”

It was as if, there and then in the Abbey Hotel at the 1992 reunion, that Molloy, the iconic captain of ‘92, was preparing to lay his sword blade upon Murphy’s shoulders.

The king of Donegal is now on his throne – but don’t expect him to rest easy on it.