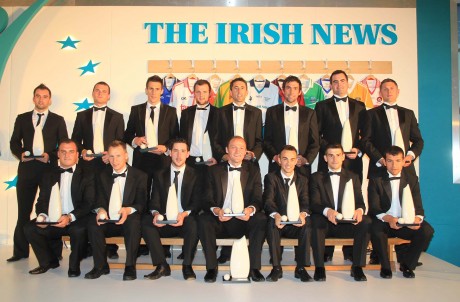 Donegal swept the boards at the Ulster All-Star awards on Thursday night.

BY CHRIS MCNULTY AT THE ARMAGH CITY HOTEL

COLM McFadden was named the Ulster GAA Player of the Year for 2012 on Thursday night.

The Donegal sharp-shooter picked up the award on a night of Donegal dominance at the Irish News/Ulster GAA awards night at the Armagh City Hotel.

McFadden has been in scintillating form for Donegal this year – and the 2-17 scored with that lethal left boot in Ulster was recognised on Thursday night.

St Michael’s man McFadden has led the line magnificently all summer, scoring 1-6 in a preliminary round win over Cavan in Breffni Park back in May, which set the tone for a remarkable campaign.

Eleven Donegal players were named on the Ulster All-Star team of the year, but it was McFadden’s scoring that saw him take the top prize, which was last year won by Karl Lacey.

McFadden beat off stiff competition from several of his peers to land the award, with Lacey, Mark McHugh, Ryan Bradley and particularly Frank McGlynn having strong claims for being in contention.

With the All-Ireland final looming, the Donegal contingent arrived at the function a little late, but they were excused and Jim McGuinness and the players entered the room to an ovation from the capacity attendance.

Player of the Year McFadden told former Armagh goalkeeper Benny Tierney, who interviewed the various award winners, that it’s been the best campaign he’s had in the green and gold.

“I’m happy with my game, but I know I have to keep working hard at it,” said McFadden.

“Jim has come in and got us believing in ourselves again. We have had a lot of hard work, but we’re getting the rewards out of it and it’s great to be looking forward to an All-Ireland final.

“Hopefully we can get over the line in the final now.”

Eleven Donegal players made it a record for any county in any one year. Paul Durcan was named in goals, with defenders Paddy McGrath, Neil McGee and the entire half-back line of Karl Lacey, Frank McGlynn and Anthony Thompson.

Special guest on the night was GAA President Liam O’Neill, the MC was RTE presenter Joanne Cantwell, while Billy Walsh, the Director of High Performance with the Irish Boxing team, was the guest speaker.

There were seminal echoes of Jim McGuinness as Walsh delivered a message to the Donegal team.

“It is all in the performance boys,” Walsh told them. “I won’t stand here and say that you will win the All-Ireland, because I can’t do that.

Down pair Dan Gordan and Conor Laverty, as well as Armagh’s Jamie Clarke and Tyrone’s Joe McMahon were the non-Donegal players named on the team of the year.

GAA President Liam O’Neill said that Donegal had helped contribute to one of the most exciting championships in years.

He said: “This has been a fantastic year for Gaelic Games. We have had the best hurling years and we have one of the most exciting finals.

“It’s been a fantastic year for football too and it has been one of the most exciting. We are delighted with the crowds and delighted to see that they’re up so much.

“The semi-final was a clash between a team trying to develop a new style and the biggest Gaelic football team ever, in Cork. It is fantastic that we have two teams in the final who haven’t been blessed with success.”