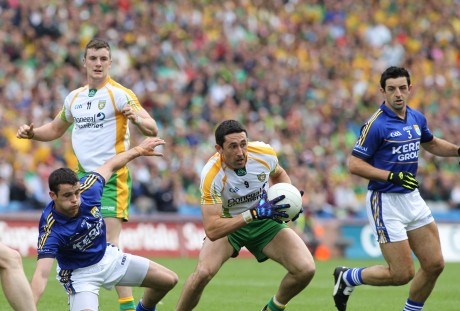 Having suffered defeat at the hands of Cork in the 2009 all-Ireland quarter final, Rory Kavanagh is in no doubt about the size of the task that faces Donegal in Croke Park next weekend – but he’s also certain that this Donegal team is much better equipped to deal with the Rebel County.

To some – considering the number of players in the current team who played in that crushing defeat – that might seem strange, but Kavanagh is under no illusion of the strides made by this group of players over the past few years.

“We have come on a long way since the last time we met Cork, if you were ticking boxes we might have been only ticking a few boxes going into our last few meetings with Cork, but now we are ticking a lot more boxes in terms of our strength and conditioning and the way we are set up. We’re much better equipped to deal with them now than we were then.”

The strength and conditioning work is one of those ticked boxes now and the St. Eunan’s man is full of praise for the way in which the players have improved in this regard.

“When you are slogging through it in the depth of winter you don’t be thinking of days like next weekend or the big games we’ve had to face already, but it definitely helps and stands to us. A lot of credit has to go to the management and the strength and conditioning coaches, they see the bigger picture all the time. Even though we don’t enjoy it, it has to be done and it’s all geared towards games like next weekend’s.”

And while that’s one box he feels certain is ticked, another comes with the confidence a winning streak brings.

“We have young lads on the team now and all they know is winning. We have two Ulster titles under our belt now and that gives everybody a massive shot in the arm in terms of our confidence going down the road.”

He admits that in other areas there might not be as big an emphasis on provincial titles, but, as the saying goes – up here it’s different.

“Up here we’d take the right arm off you for an Ulster title, it does give you confidence heading up the road to Croke Park. We set out first and foremost with the Ulster title in mind and now we’ve achieved that goal we are focused on the new target.”

He’s under no illusions about the size of the task ahead, and he suggested that a repeat of the Kerry performance would not be good enough.

“Cork is a huge team filled with big men who have plenty of experience. These are guys who have won an all-Ireland and we really will be up against it. Our Kerry performance won’t do this time around, we looked at the Kerry performance and we know we made some silly mistakes, things we will have to rectify if we are to progress.”

That said, Kavanagh insists defeating the likes of Cork is the bar they have now set for themselves.

“I suppose the supporters have set us new targets now after the Kerry game, but we have to set ourselves new targets too.

“We are playing two championships, one is the Ulster and the other is the all-Ireland series, we have won one of them and hopefully we can go on and win the other one but we know that if we are to have any ambition of winning an all-Ireland you have to teams like Cork.”

To do that he says, every man on the Donegal squad will hone in on the job at hand before next weekend, and he’s confident that if they can do that, they can match the Rebels.

Kavanagh said: “Cork have beaten Kerry one of the top teams, they are big and strong and have a lot of running power, but I hope we are able to match them. They will present a new set of challenges to Kerry and we’ll have to get our heads around that and prepare for it as well as we can.

“That said, I think this squad now has faith in our ability and if every man does their job well on the day for the team, there’s no reason why we can’t progress.”