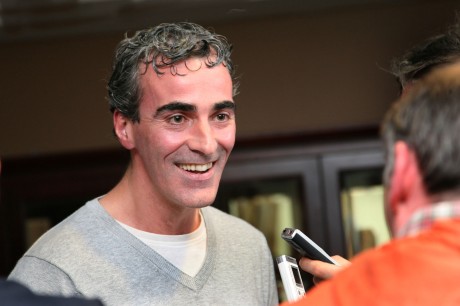 Jim McGuinness will have been a relieved man after his stars escaped injury in yesterday’s club action.

Two weeks out from the All-Ireland semi-final against Cork, a raft of county player were in League action for their clubs yesterday, though some clubs played minus their Donegal contingent.

County captain Michael Murphy was in impressive scoring form with nine points as Glenswilly scored an away draw in Gaoth Dobhair in a game that also had the McGees and Neil Gallagher playing prominent roles.

In Glenties, Naomh Conaill lined out with Anthony Thompson and Leo McLoone as subs, while Four Masters had Paul Durcan in goals and Karl Lacey kicked a splendid six points from midfield as the Donegal town side scored a win.

Kilcar headed to Dungloe without Patrick McBrearty and Mark McHugh, but it was a fringe member of Jim McGuinness’s panel who lit the touchpaper in Rosses Park – Adrian Hanlon sent a timely reminder to the county management as he scored a superb 2-6.

Colm McFadden scored 1-2, but St Michael’s lost to Ardara at The Bridge, where Christy Toye, Daniel McLaughlin and Paddy McGrath all lined out, though Martin McElhinney sat out.

McGuinness will be pleased to note no reports of injuries sustained in the encounters as the full focus of the county now turns to the August 26th meeting with the Rebels in Croke Park.

Donegal’s player met in Letterkenny on Saturday for some video analysis and the real work of plotting for Conor Counihan’s team continues on the training pitch tomorrow night.

McGuinness is a man armed with a plan.

“For us it’s just about trying to execute that on the field of play.

“That’s what our energy has to go into now, trying to get that clear in our own minds and relay it to the players and then get them up to a level on the training field that they’re able to deliver for us in the game.

to do that but at the same time we have to look forward to it.

“It’s where we want to be really and it was a big victory for us as a group and we hope now that it can push us forward a wee bit and bring us forwards as a group.”

Meanwhile, Donegal GAA is on the fund-raising path this week with a number of ventures ongoing as county board officers attempt to raise the final €15,000 to aid the development of the Centre of Excellence in Convoy.

Jersey draw lines are on sale as are €10 tickets for a big fund-raising draw, while individuals are still being sought to contribute €500 to Club Tir Chonaill.