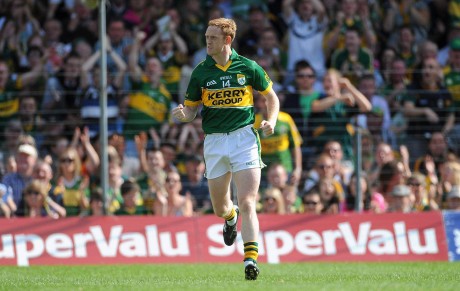 Chris McNulty on the classy Colm ‘Gooch’ Cooper, whose stage to shine is usually Croke Park…

WITH Colm Cooper it all seems so effortless.

Last Saturday evening, the Dr Crokes forward wrote himself into the Kerry history books. His 1-4 haul against Clare in the procession at the Gaelic Grounds was hardly his most memorable in the green and gold – but it took him to an important milestone.

Re-writing the history books is noteworthy in any county, of course, but in Kerry creating history has that little bit extra weight piled on.

Cooper’s third point of the game on Saturday night saw him soar to the top of Kerry’s list of Championship scorers – past no less a man than Mikey Sheehy.

The point was typical Gooch. Long ball by Tomas Ó Sé (who made a new record of 82 championship appearances last weekend), batted down by Kieran Donaghy and onto Cooper, who seemed like he hardly even needed to look at the target as he arched over a trademark score.

Donegal have quite a few puzzles to solve on Sunday, but the big quandary will be keeping quiet the man who needs no name introductions anymore. The Gooch will suffice.

Cooper has played 70 Championship games for Kerry. He has never been held scoreless in Croke Park and in 30 appearances in Dublin’s great theatre he has scored 9-121 – an average of just under five points a game.

It’s not to say he’s been handed ‘handy’ frees either. When he started out, Dara O Cinneide was the place-kicker; now it’s Bryan Sheehan.

When Kerry folk lavish praise, the subject must be special.

Colm Cooper was always special though.

“From the day that I saw him as a Kerry minor, I knew that he was going to be one of the great players of our time,” said the great Mick O’Dwyer.

“He proves it all the time.

“That’s how good Gooch is. He is one of the best players I have ever seen. He has all the skills, he is a good fielder, he is unselfish on the ball and he is a marvellous finisher with both his left and right leg, so he has all the qualities that are required to be a great player.

Great players always leave their mark at the entrance – Colm Cooper was hardly in the door when he announced his arrival in style.

A month shy of his 19th birthday, Cooper hit 1-2 against Laois in a National League outing. He was man of the match and scored with his first touch.

“Not bad for a youngster making his debut in senior intercounty football and Cooper, the youngest son of Mike and Maureen Cooper, Ardshanvooly, took it all in his stride,” wrote the Kerryman Newspaper the following week.

Jack O’Connor is another who always saw the potential in the genial Cooper.

He said: “He grew up with a football. Word would have reached us down in South Kerry about how good he was when he was fairly young. When Declan started going into Killarney for underage Kerry teams, he’d come back with word of this skinny little kid called the Gooch who was literally unmarkable.”

Cooper hasn’t had things easy either.  In 2005 immediately after the All-Ireland quarter-final against Mayo, Cooper learned of the tragic death of his best friend, Kieran Cahillane. A few months later, his father Mike Cooper dropped dead.

The youngest of seven in a tight family in Killarney, it stunned the Gooch.

Football is his release, but the real world is hard to escape when you’re Colm Cooper.

“Everyone wants a piece of the Gooch,” says Jack O’Connor.

“He works in the bank and people will walk right in and up to the counter just to take a look at him or to ask him something about football. He walks down the street and they want to talk about football. There are times when it gets to him. He wants to be the regular guy….He’s public property.

“He says to me that the easiest part is training and games, because there’s a wire between himself and the rest of the world.”

Last year, the unthinkable happened – questions began to surface about Gooch’s performances. Then, he went to Croke Park and destroyed Mayo. His performance prompted Jack O’Connor to lavish his star turn, who once again chose Croker as his place to perform.

“This is his theatre here, his happy hunting ground, and no better place to come into form,” said O’Connor.

Cooper modestly played down his breaking of Sheehy’s record last week – and believes that Donegal will be a stern test. He says all the right things and gives away very little, if anything, in interviews.

“I’m not into records or looking at how many scores I get. If you told me at the start of my career that I’d do something like that I would have laughed at you,” he says.

Cooper was on an extended break when the teams met in March. Kerry blitzed Donegal that day in Fitzgerald Stadium, but that meeting is unlikely to have any influence on the outcome of this weekend’s meeting.

“They have their style and the strategy down to a ‘T’ and teams have found it very difficult it deal with.

“I didn’t play that day in the League, but I looked in and our fellas played very well. But we know it’s a whole different thing to be in the heat of Championship football coming into August so we will have to be fully prepared for a completely different game.”

For Donegal, Colm Cooper in Croke Park will provide a completely different test to anything they’ve faced before.