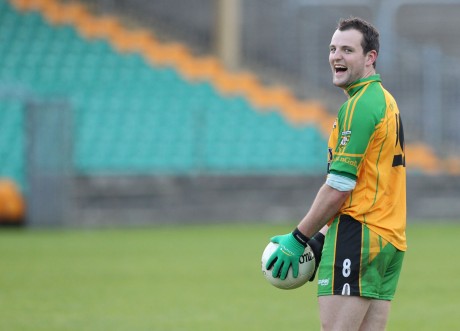 Michael Murphy in training ahead of Donegal’s clash with Cork. Photo: Donna McBride.

AS A youngster kicking the ball around in the back garden, Michael Murphy probably dreamt of playing for Donegal. Every ball he popped over the bar, or rattled to the net, was another score for his county.

Boyhood fantasy stuff, the kind of dreams every sporty kid has.

Perhaps only his wildest dreams though would have told him that by the age of 23 he’d not only be playing for his county, he’d also be the captain that has led them to back-to-back Ulster titles and successive all-Ireland semi-finals.

It would be all too easy to get carried away by it all – but that’s not Michael Murphy’s style.

Feet firmly on the ground, it’s clear to see the sense of pride he has in representing his county. It oozes from him – and it could well prove to be Donegal’s secret weapon this Sunday.

“We’re a county that’s football mad and people want the county to do well. We know that, for us lads putting on the Donegal jersey day in and day out is an honour.”

That pride, the desire to do their best for the people of their county, could well just give Murphy’s troops that extra bit of hunger come Sunday against a Cork side that has already tasted all-Ireland success.

“We were lucky enough to retain the Ulster title this year and with the victory over Kerry the expectations have risen even higher. That said I know the football public in Donegal, and us as footballers too, are a fairly level-headed bunch and we know that Cork will be another step up yet again. We know we’re going to have to raise our level of performance again to compete with them.”

Murphy was the county’s rising star three years ago when Donegal lost heavily to Cork in the all-Ireland quarter-final and he like the rest of the players would love to expunge the memory of that awful day.

“We have bad memories from that day in 2009, it wasn’t a nice place to be that day and as a group of players that’s an experience we’d love to banish, but it’s not going to be easy.”

The teams met earlier this year in the league when Murphy bagged a quick goal that sent Donegal on their way to victory, but championship is different and he knows it.

“We have played them in the league, but the league is a different thing altogether and the records will show in the championship the last time they played us they beat us very comprehensively. They still have a large number of that team still playing, we know the proposition that lies ahead.”

That proposition, says Murphy, includes a very tight unit in defence, a couple of massive footballers around the middle of the park who can attack as well as defend and flair players up front who can put the ball in the back of the net.

“It’s only two years ago that this side went all the way to win an all-Ireland championship, they are a team we look up to and a team we are looking forward to competing against.”

If the players are looking forward to pitting their wits against Cork, then the critics of Donegal football will no doubt be sharpening their pencils in the hope of another attack, but that’s not something that bothers the captain.

Perhaps only in Donegal have the players and management earned the credit and plaudits they deserve for their achievements over the past two seasons, but the Glenswilly man is quick to point out that’s not what they are in the game for.

“It would be wrong to be in it if we were looking for credit, we’re in it to represent Donegal and we’re glad to be able to put on the jersey for Donegal and represent the people of the county. That’s what we’re in it for.”

And while he said there would always be people out to criticise, it didn’t matter.

“Various circles try to criticise the way we play or what you don’t do, or what you do, but that’s life in general, you’re going to be criticised for what peoples’ perception of you is. We’re not in the business of trying to please absolutely everybody.”

Many of the critics have bemoaned the way Murphy has been asked to play for the team, but the captain himself has no complaints.

“As a forward you are always looking for scores, but at the end of the day whoever scores them for Donegal you don’t mind. The boys have chipped in with scores from the back line and midfield and the other boys up front have scored a fair few.

“It’s about doing your job for the team, whatever role you are given on a given day for the team – you do it to the best of your ability and hopefully all those roles come together and we get a performance for Donegal.”

It always comes back to that.

It’s always about getting the performance to reward those who follow the team and the big Glenswilly man is glad they have been able to do that of late.

“You just want to represent Donegal as best you can and the people of Donegal know that. If we can get a good few results on the back of that too then we’ll be happy. That has helped us in the last few years, we’ve got a couple of good results that has breathed confidence throughout the side, hopefully we can continue to do that now against Cork.”

The supporters Murphy and his men are hoping to please have played their part in boosting the team’s confidence and lifting their drive and determination when it was needed most, he says.

“It’s a massive help for footballers to know the support is there, especially the last day when it seemed the tide was turning and Kerry had got the goal and couple of points after, to hear the crowd rally you on was brilliant.”

Since that heady day in Croke Park, the excitement has been building in Donegal in anticipation of Sunday’s game, excitement it seems that just fuel’s the captain’s desire ahead of the semi-final.

“To see all the young people at the summer camps and see everyone out with the Donegal flags gives us a great feeling. Donegal is a football mad county and people want success.

“We know that when we pull on the Donegal jersey we are going out to represent them as best we can and that’s where the biggest pride is – it’s pulling on the jersey as a Donegal footballer.”

Nothing could give Michael Murphy greater pride than that.

It’s boyhood fantasy stuff. The stuff that dreams are made of.