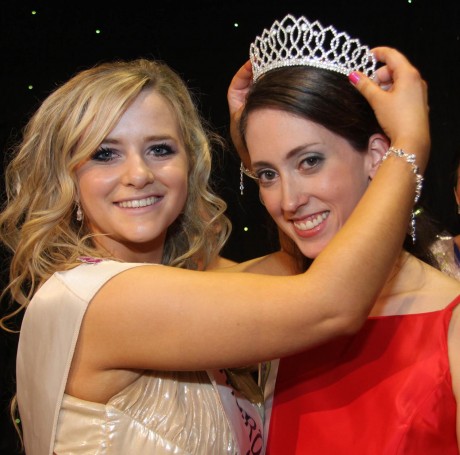 The 45th Mary from Dungloe winner Meghan Davis from Philadelphia is crowned by outgoing winner Debbie Rodgers at the crowning cabaret in Dungloe on Sunday night. Photo: Eoin McGarvey

26-year-old Meghan was crowned by last year’s winner, Debbie Rodgers, to great cheers from the Marys who had all spoken of how close they had become during the time they spent together.

As Meghan became only the second participant from Philadelphia to be crowned Mary from Dungloe, following Katie Armstrong’s win in 2005, it brought a story that began in 1990 to a wonderful ending.

Meghan told the MC of the crowning cabaret, popular entertainer Conal Gallen, that she he had first visited the festival in 1990 when her aunt was the Wilkes-Barre Mary.

It was during this journey that Meghan first harps for the first time, and it wasn’t a certain football Mr Gallen thought she meant.

Having trained on a pedal harp, Meghan tried for six months to hire one for her performance at the crowning cabaret, but to no avail, she told the audience.

Instead she hired an Irish harp in Philadelphia and learned how to play it in less than two months and, thanks to Gaoth Dobhair based harp player Kayla Reed who provided hers for the cabaret, gave a wonderful rendition of the classical piece, J.S. Bach/Gounod’s Ave Maria.