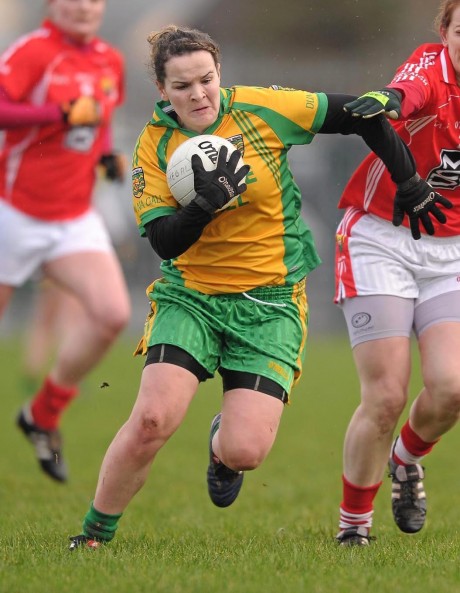 The Donegal Ladies will be without Geraldine McLaughlin.

DONEGAL Ladies travel to play Champions Cork at Dr Hyde Park, Roscommon, tomorrow afternoon (throw-in 12.30pm) without the services of star forward Geraldine McLaughlin and her sister Nicole as their older sister Lorna is getting married on the same day.

With fellow Termon players Grainne McClafferty, Roisin and Niamh Friel also invited to the wedding, team manager Micheal Naughton admits that preparations for the game against the Rebel County have been far from ideal.

“The Donegal county board asked for a date change once we knew about the wedding clash but it was turned down by the National Ladies Committee in Croke Park.

“Playing against the All Ireland champions was always going to be a big ask but this has just made the task that little bit harder,” he sighed.

“That said, if we produce the game in the right frame of mind and produce good performances all over the field we won’t be too far away,” he said.

Geraldine McLaughlin hit a superb 1-7 and Ciara D Shovlin bagged a brace of goals last time out as Donegal’s ladies booked a place in the All Ireland quarter-final thanks to an excellent win over Kildare at Breffni Park.

“I’m very disappointed for the McLaughlin girls, especially Geraldine who must have been in line for an All Star, and they’ll be a big loss.

“I’m keeping my fingers crossed that the other Termon girls – Grainne McCafferty and Roisin and Niamh Friel – will be able to play as they’ve been invited to the wedding too.

“In fairness to Geraldine she said that only she’s a bridesmaid she would have played the game – such is her dedication,” he said.

Elsewhere, the Donegal management are sweating on the fitness of Four Masters player Kate Keaney who was forced to leave the action before half-time during the Kildare game.

“We’ll make a final call on Kate at training on Thursday night. Otherwise, the other girls are all fit and raring to go,” he said.

Reflecting back on the Kildare game, the Donegal boss said that the girls were anxious to put their poor Ulster final showing against Monaghan to bed.

“The girls knew that they didn’t do themselves justice in the Ulster final and they wanted to put the record straight. We were missing  a few girls that day too and they were back in time for the Kildare match which made a big difference.

“That’s why losing the two McLaughlin girls this time around is so disappointing,” he said.

Donegal and Cork met in the opening game of this year’s National League campaign in Ballyshannon and they came within the width of the upright of recording a famous win.

“Geraldine hit a couple of balls off the upright and if they had gone in we could so easily have won that game. It was our best performance in the league and I’ll be looking for more of the same on Saturday.

“If we leave everything on the field and still lose out I’ll be happy. I don’t want any regrets. It’s 15 against 15 and I’ll be reminding the girls of that fact before they take to the field. It all boils down to whoever wants to win it most,” he said.