BY LIAM PORTER AT LECKVIEW PARK

A SUPERB late penalty save from goalkeeper Darren Smyth helped Bonagee Utd to victory in the Knocalla Caravans Cup final in Leckview Park yesterday in a game that hung in the balance until the final whistle.

Damian McGee’s cracking left-foot drive just before the break had given Bonagee the lead, but both sides had chances before and after that in a cracking game played in splendid sunshine.

Indeed seconds after he’d pulled off the penalty save, Smyth saved even more spectacularly from the resulting corner and from then it seemed as if Bonagee’s name was on the cup.

And on the balance of things they had just about shaded it too, playing some excellent football and splendidly soaking up the Glenea pressure in the second half as the Donegal League champions pressed for an equaliser.

Glenn Rainey and Darek Frankowski at the heart of the defence were superb but the entire Bonagee defence were made to earn their keep by a lively Glenea attack for whom Darren McGeever was a constant threat.

And he wasn’t the only threat the Donegal League side offered either and they probably should have taken the lead in the 14th minute when Michael Barry raced on to a superb through ball and held off Rainey’s challenge but high and over the bar when he needed a more composed finish.

At the other end Greg McGee’s powerful free-kick was brilliantly parried away by Cathal Gallagher as the teams became accustomed to playing in the heat and began to get into their stride.

That effort had come in the 28th minute and seven minutes later Gallagher was called into action again, this time diving full length to his right to tip away a great strike from Aidan McLaughlin.

At that stage Bonagee were on top and it was no real surprise when they broke the deadlock in the 41st minute. Damian McGee cut inside from the right and jinked his way along the edge of the box before firing a low left-foot drive into the bottom corner.

Glenea almost hit back immediately when McGeever pulled the ball out of the air and skipped past JP Doran only to see his low strike well saved by Smyth.

The Donegal League side raced out of the blocks at the start of the second half and piled on the pressure in search of an equaliser.

Paidí McGee’s free-kick fell to Donal Coll in the 46th minute but his first-time shot was well blocked by Frankowski. Six minutes later a beautifully struck free-kick from Barry McGinley beat the Bonagee wall but couldn’t beat Smyth who scurried across to save low to his right.

It wasn’t all one way traffic though and Bonagee should have extended their lead in the 63rd minute when Aidan McLaughlin flicked on a long throw but the inrushing Dean Larkin headed straight at Gallagher.

Gallagher saved ten minutes later with his legs from a Seamus Cusack effort and from the resulting corner Glenea managed to clear Glen Rainey’s header off the line and claims for handball were dismissed by referee John Coll.

Substitute Anthony Appiah added a new lease of life to the Bonagee attack and he was involved in a wonderful piece of football that deserved a goal at the finish. He linked up first in a one-two with Greg Magee before setting off on a mazy run finishing with a curling left-foot shot inches past the top corner.

Had it gone in Glenea’s hopes would have faded completely, but they were still in the game and had a lifeline handed to them in the 85th minute when McGeever was chopped down in the box.

Smyth however was in no mood to be beaten and he dived smartly to his left to push Ryan McFadden’s shot away and his defence did the rest smuggling the loose ball away for a corner.

From that corner Paul Sweeney’s header back across goal was hammered goalward, but again Smyth got a hand to the ball and it was hacked away from danger.

A late break from Bonagee saw Appiah feed Jamie Lynagh, but it came to nothing with his shot easily saved by Gallagher and after that, despite plenty of endeavour, Glenea just couldn’t find their way past the Bonagee men who held on for a deserved victory. 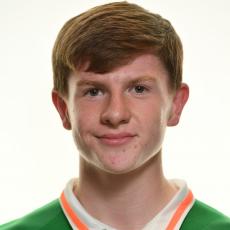 O’Reilly is currently a member of the Finn Harps U17 squad and will remain with Declan Boyle’s outfit until...