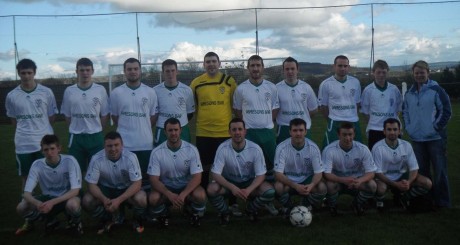 KILDRUM Tigers held their nerve in the heat of a penalty shoot-out battle against Drumkeen United last night to advance to a Knockalla Cup second round meeting with Kilmacrennan Celtic.

With the sides having shared the spoils after a frantic 90 minutes and with light fast fading, match referee Donal McCafferty decreed that there would be a peculiar two periods of five minutes each played as extra time.

So, it was down to the 12 yard kicks – and there goalkeeper Marty McGinty emerged as the Tigers hero with two magnificent saves.

McGinty got down superbly to claw away Drumkeen’s first spot-kick by Mark Marley and when he touched Gavin Reilly’s effort onto the post it was set up for Gavin Doherty to tuck home the winning penalty.

The striker duly obliged and, after clinically placed penalties – all of them to Paul McCauley’s left side – from Ronan Coyle, Jonny McGinty and Darren McCready, the Tigers had a perfect lot to win 4-1.

Drumkeen had actually edged in front 15 minutes from time with a penalty – Marley dispatching lethally past McGinty this time after Paddy McLaughlin was deemed to have fouled Richard Moore inside the box.

It was a short-lived lead, however, as Kildrum were level within four minutes, Damian Crossan soaring an equaliser high past McCauley after letting fly with a glorious first-time effort that gave the Drumkeen stopper no chance.

Both sides had chances late in the daty to sneak through, but Ronan Coyle shot off target twice before Marley clipped the top of the crossbar in stoppage time.

Both these sides are eyeing up the draw for the second round of the FAI Senior Cup with possibilities of lucrative ties against League of Ireland opposition, yet there was no lack of effort for the domestic trophy from either on Wednesday.

The best Kildrum fashioned was when Cormac Carlin found himself within striking distance, but McCauley somehow hooked away with Darren Cassidy drilling the rebound over the crossbar.

Drumkeen came close, too, but Sean Ferry headed at McGinty after connecting with Philip Whyte’s cross while the Kildrum ‘keeper saved well from Richard Moore’s snapshot after he was allowed turn on a sixpence just inside the area.

Kildrum had what seemed plausible penalty claims waved away by the referee when Carlin went to ground midway through the half. And Drumkeen had shouts of their own turned down when McNamee, after beating the offside trap, went down under McGinty’s challenge.

The clock had just ticked past the hour when Moore connected to a teasing ball in by player-manager Benny Bonner, only to stab straight at McGinty.

Marley had the hosts ahead from the spot, but Crossan’s equaliser sent the tie into the murky period of extra-time. When that failed to throw up a victory it was left to the penalties, and with Bonner the only man to convert for Drumkeen it’s Kildrum who advanced.