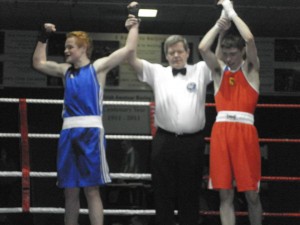 Brett McGinty (left) after winning the national title at the weekend.

DONEGAL is toasting the arrival of another four national boxing champions this week following victories by four young boxers from the county at the National Boy 1, 2 and 3 finals in the National Stadium.

In the Boy 3 48kgs final, Aaron Harkin scored one of the narrowest wins in the finals when he out-pointed John P Sweeney of Innisfree 11-10 to take the title back to Donegal. The previous evening, Harkin had beaten Arthur McCarthy (Brian Dillons) in his semi-final, 9-4.

Brett McGinty has also taken his second national title in three years back to Mongavlin in St Johnston. The highly-rated McGinty, who boxes out of the Oakleaf club in the Brandywell area of Derry city, was an impressive 10-4 final winner over Castlebar’s Colm Quinn on Saturday afternoon at Boy 3 57kgs. McGinty raced 3-0 ahead in the first round and was 7-3 up going into the final round, where an explosive last couple of minutes earned him a six-point win.

Having lost at the semi-final stage last year, McGinty is now back at the summit again. On Friday night, he had to overcome the challenge of South Meath lad Darragh Murray, and he made sure of his place in the final with an 11-9 win.

There was glory, too, for Illies lad Eamon Sweeney, who beat Sean Purcell (Callan) 5-4 at Boy 2 39kgs final.

And Convoy was celebrating as Bryan McNamee topped the pile at Boy 2 50kgs, overcoming MJ Mongan 9-5 in a good final.

There was heartbreak for some local fighters too, however. Buncrana’s Stephen Bonner was beaten 14-3 by James Clarke (Kilnamanagh) in the Boy 3 80kgs decider, Convoy’s Kenan Gibson lost to Connie McDonagh (Dungarvan) 7-2 in the Boy 2 57kgs final, Lee Harkin (Illies) went down 9-6 to Sean Dempsey from Gorey in the Boy 1 42kgs bout, while there was no joy either for St John Bosco’s Brendan McParland, who suffered a 16-3 loss against Michael Walsh in the Boy 1 66kgs.

Elsewhere, Christopher Stokes (Raphoe) and Enda Callaghan (Carndonagh) lost out at the semi-final stage on Friday.